- May 07, 2011
Eliot Coleman, one of the early spokespersons for the organic movement and now a "revered icon", has been in the news lately. His daughter, Melissa, has just published a memoir of her life growing up on Coleman's remote homestead in the early '70's, as he and Melissa's mother, his then-wife, honed the skills that would enable him to write three popular how-to books, host radio and public television shows, and guide countless apprentices who made the pilgrimage to his working farm near the Maine coast.

From the reviews I have read, Melissa Coleman's book, titled "This Life is in Your Hands", offers an unsentimental account of growing up with a father who was unswervingly committed to the execution of his ideals. Eliot Coleman embraced the back-to-the-land/voluntary simplicity ethic with a single-minded determination that enabled him to spend twelve-hour days felling trees and clearing stumps with only an axe, hauling water with an oxen-yoke, building his cabin by hand, and eschewing modern-day conveniences such as electricity and running water. But this is not a book review and Melissa Coleman's story is her story. Yet something is familiar.

In 1972, Ken King found an abandoned but beautiful piece of land tucked into an undeveloped corner of Jackson County. With no experience in farming, mechanics, or building, but with a lot of old farming books from the previous century, he set about creating a homestead and working organic farm, practically by hand. He was idealistic. He was determined. Sometimes he was downright stubborn. Eliot Coleman's daughter talks of her father's "supernatural energy". That too described Ken. Days were long and there was always more to do - and more that he was willing to do. He always leaned forward into the next task or project - until he was stopped.

Ken passed away two years ago today. But his three sons are not writing memoirs. Two of them went to the Ann Arbor Farmers Market today along with three interns to sell seedlings to myriad Ann Arbor gardeners. The third son stayed at the farm to manage the two greenhouses that have been tended for almost two months and are now bursting with healthy young herb and vegetable plants. A third greenhouse has been cleared and is ready to receive the first planting of early-season tomatoes.

Another intern painted bee hives for the new broods arriving next week. Yet another intern transplanted even more seedlings to keep the supply coming for the resurgent interest in home gardening and local produce. The view from the house that had once been of abandoned and overgrown fields, now showed orderly patches with new growth starting to mark the regular rows, tractors at the ready for preparing ground, fruit trees and grapes newly planted and even a mushroom project back in the woods.

Ken could not have imagined all of this activity nor could he have attempted it on his own. But he set it in motion. Call it energy, or stubbornness, or idealism, but whatever the force that compelled Ken to plant himself at Frog Holler did not die. It grows. It grows. 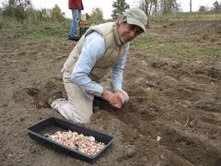